“In Sarajevo and in Syria, these are societies — in Bosnia, in Serbia, in Kosovo, in Syria — where ethnicities live side by side and intermarry for long periods of time until it becomes valuable to exploit the division. And yes, the division's there because you can always revert back to history, you can always inflame it, but it is manipulated for political ends.” -Anne-Marie Slaughter, president and CEO of the New America Foundation Islamic State (IS) has abducted dozens of Assyrian Christians from villages in north-eastern Syria, activists say.
The Syrian Observatory for Human Rights reported that at least 90 men, women and children were seized in a series of dawn raids near the town of Tal Tamr.
Some Assyrians managed to escape and made their way east to the largely Kurdish-controlled city of Hassakeh.
It comes as Syrian Kurdish fighters backed by US-led air strikes continue to advance into IS-held territory.
Hassakeh province is strategically important in the fight against IS because it borders both Turkey and areas controlled by the group in Iraq.
'Searching for news'

Activists reported that IS fighters swept through a string of villages along the banks of the Khabur river around dawn on Monday. 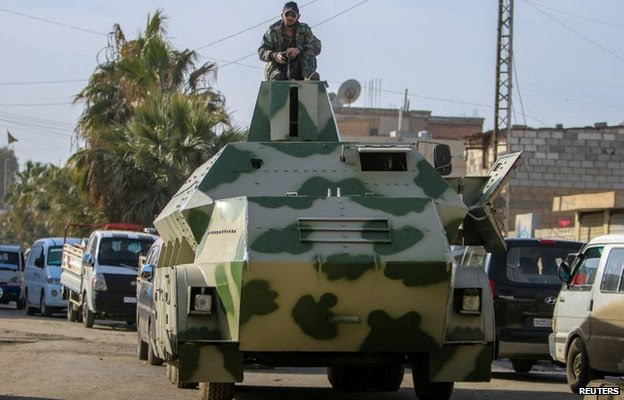 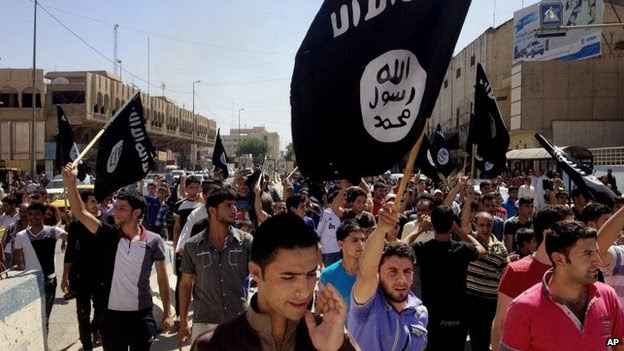 IS has forced Christians living in its territory to either convert to Islam, pay a religious levy or face death
The Syrian Observatory for Human Rights, a UK-based group that monitors the four-year conflict in Syria, said at least 90 Assyrians had been taken captive, most of them from the village of Tal Shamran, about 45km (28 miles) from Hassakeh.
The head of the group A Demand For Action, which focuses on religious minorities in the Middle East, said between 70 and 100 were seized.
Nuri Kino told the Associated Press that about 3,000 managed to escape and had sought refuge in Hassakeh and Qamishli, to the north-east.
He said his group had spoken to several villagers and their relatives.
Continue reading the main story

I feel so helpless... I cannot do anything for them but pray”

Assyrian woman from Tal Shamran
An Assyrian woman from Tal Shamran who lives in Beirut told AP that she had been unable to make contact with members of her family.
"Landlines have been cut, their mobiles are closed," she said. "Have they been slaughtered? Are they still alive? We're searching for any news.
"My family visited me last month and returned to Syria. There were clashes but it was normal, nothing exceptional.
"I feel so helpless. I cannot do anything for them but pray."
The Syrian Observatory also said Tal Tamr had seen heavy clashes between IS and the Kurdish Popular Protection Units (YPG) militia.
On Monday, the group and Kurdish officials said IS militants had been forced back to within 5km (3 miles) of the town of Tal Hamis, to the east.
Ancient community

Christians are believed to have constituted about 10% of Syria's 22 million people before the uprising against President Bashar al-Assad began almost four years ago.
Assyrians, of whom there were about 40,000 in Syria, are Nestorian Christians and speak Syriac, a form of Aramaic, the language of Christ. 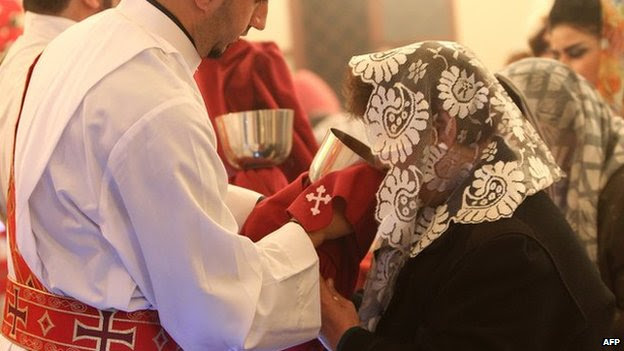 Hundreds of thousands of Christians, many of them Assyrians, have fled Syria to escape the violence
The largest concentration of Assyrians in Syria is in Hassakeh province, but there are also smaller communities in Aleppo, Homs and Damascus.
The Assyrian villages along the Khabur river were established by the French authorities during the mandate era for Assyrians who fled persecution in Iraq in 1933.
Many Assyrians are believed to have fled Syria not only to escape the conflict in the country but also violent attacks by extremist groups like IS, which has forced Christians living in the territory it controls to either convert to Islam, pay a religious levy or face death.
It was not clear what IS intended to do with its Assyrian captives.
Earlier this month, militants in Libya affiliated to the group released a video showing them beheading 21 Egyptian Coptic Christians.
Posted by Deuce ☂ at 2/24/2015 08:05:00 AM