Should Lockerbie bomber Abdelbaset al-Megrahi be Getting Nervous? 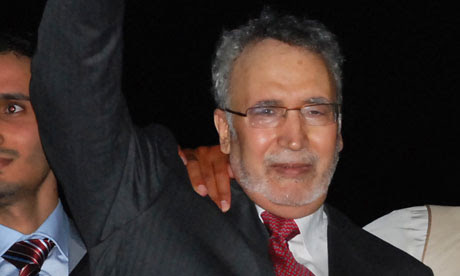 Lockerbie bomber Abdelbaset al-Megrahi arrives back in Tripoli two years ago. The 'terminal cancer patient' is still alive today. Photograph: AP
The Scottish government says its decision to release the Lockerbie bomber exactly two years ago has been vindicated.
The release of Abdelbaset al-Megrahi from Greenock Prison on the grounds that he had just three months to live has proved controversial as he is still alive two years after returning home to Tripoli.
On the second anniversary of his release, two US senators have demanded his extradition from Libya. New Jersey senators Robert Menendez and Frank Lautenberg want the rebel-led transitional Libyan government to send Megrahi to the US.
But a spokesman for Scottish first minister Alex Salmond said the government stood by the decision. In a statement, the spokesman said the decision "was taken on the basis of Scots law" and was not influenced by economic, political or diplomatic factors.
"We stand by it, and al-Megrahi is dying of terminal prostate cancer."
Megrahi is the only man convicted over the December 1988 bombing of Pan Am flight 103, which killed 270 people, mostly Americans, when it exploded over the Scottish town of Lockerbie.
He was freed on 20 August 2009, after prison doctors said he had prostate cancer and likely had only three months to live.
Last month he appeared at a televised rally in Tripoli alongside Muammar Gaddafi.
Posted by Deuce ☂ at 8/22/2011 12:43:00 AM