A Brief History of the CIA's Unpunished Spying on the Senate

President Obama's choice to lead the intelligence agency has undermined core checks and balances with impunity.

This is the story of John Brennan's CIA spying on Congress and getting away with it.

Last March, Senator Dianne Feinstein accused the CIA of spying on the Senate intelligence committee as it labored to finalize its report on the torture of prisoners. “I have grave concerns that the CIA’s search may well have violated the separation of powers principles embodied in the United States Constitution,” she said. “I have asked for an apology and a recognition that this CIA search of computers used by its oversight committee was inappropriate. I have received neither.”

CIA Director John Brennan denied the charge. “Nothing could be further from the truth,” he said. “We wouldn’t do that. That’s just beyond the scope of reason in terms of what we’d do.” It would be months before his denial was publicly proved false. "An internal investigation by the C.I.A. has found that its officers penetrated a computer network used by the Senate Intelligence Committee in preparing its damning report on the C.I.A.’s detention and interrogation program," The New York Times reported. "The report by the agency’s inspector general also found that C.I.A. officers read the emails of the Senate investigators and sent a criminal referral to the Justice Department based on false information."
The Senate intelligence committee expressed appropriate outraged at these anti-democratic machinations:

A statement issued Thursday morning by a C.I.A. spokesman said that John O. Brennan, the agency’s director, had apologized to Ms. Feinstein and the committee’s ranking Republican, Senator Saxby Chambliss of Georgia, and would set up an internal accountability board to review the issue. The statement said that the board, which will be led by a former Democratic senator, Evan Bayh of Indiana, could recommend “potential disciplinary measures” and “steps to address systemic issues.” But anger among lawmakers grew throughout the day. Leaving a nearly three-hour briefing about the report in a Senate conference room, members of both parties called for the C.I.A. officers to be held accountable, and some said they had lost confidence in Mr. Brennan’s leadership. “This is a serious situation and there are serious violations,” said Mr. Chambliss, generally a staunch ally of the intelligence community. He called for the C.I.A. employees to be “dealt with very harshly.” 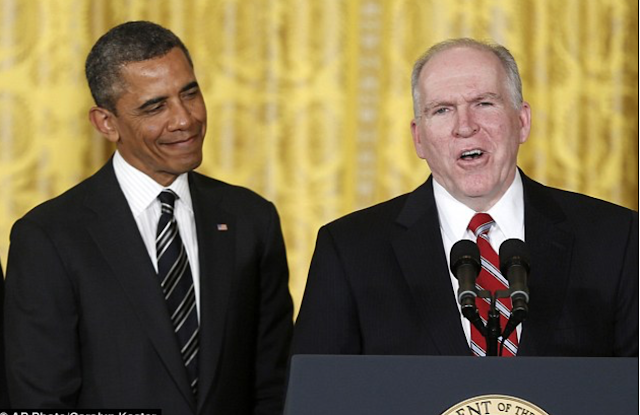 Late last week, that internal "accountability board" announced the results of its review. If you've followed the impunity with which the CIA has broken U.S. laws throughout its history, you'll be unsurprised to learn that no one is going to be "dealt with very harshly" after all. "A panel investigating the Central Intelligence Agency’s search of a computer network used by staff members of the Senate Intelligence Committee who were looking into the C.I.A.’s use of torture will recommend against punishing anyone involved in the episode," The New York Times reports. "The panel will make that recommendation after the five C.I.A. officials who were singled out by the agency’s inspector general this year for improperly ordering and carrying out the computer searches staunchly defended their actions, saying that they were lawful and in some cases done at the behest of John O. Brennan."

Done at the behest of Brennan, who once feigned ignorance about the actions in question, going so far as to declare them beyond the scope of reason! "While effectively rejecting the most significant conclusions of the inspector general’s report," the story continues, "the panel, appointed by Mr. Brennan and composed of three C.I.A. officers and two members from outside the agency, is still expected to criticize agency missteps that contributed to the fight with Congress." Who'd have guessed that a panel appointed by Brennan to look into malfeasance presided over and in some cases ordered by Brennan would decide that neither Brennan nor any of the people Brennan leads should be held accountable?
Brennan and the CIA have behaved indefensibly. But substantial blame belongs to the overseers who've permitted them to do so with impunity, including figures in the Obama administration right up to the president and Senate intelligence committee members who, for all their bluster, have yet to react to CIA misbehavior in a way that actually disincentivizes similar malfeasance in the future. President Obama should fire John Brennan, as has previously been suggested by Senator Mark Udall, Trevor Timm, Dan Froomkin, and Andrew Sullivan. And the Senate intelligence committee should act toward the CIA like their predecessors on the Church Committee. Instead, the CIA is asked to investigate its own malfeasance and issue reports suggesting what, if anything, should be done.

Mr. Brennan has enraged senators by refusing to answer questions posed by the Intelligence Committee about who at the C.I.A. authorized the computer intrusion. Doing so, he said, could compromise the accountability board’s investigation.

“What did he know? When did he know it? What did he order?” said Senator Carl Levin, the Michigan Democrat who is a member of the Intelligence Committee, said in an interview last week. “They haven’t answered those basic questions.”

Senator Levin, you're a member of a coequal branch. You've flagged outrageous behavior among those you're charged with overseeing. What are you going to do about it?
Posted by Deuce ☂ at 3/19/2018 06:26:00 PM