Why we have tied ourselves to the colonial apartheid state of Israeli is beyond me. You will not see this video on the US media for all the obvious reasons but we all pay the price for the support we provide to such a state.


A radical scene unfolded Friday after Israeli forces intercepted the weekly protest in the West Bank village of Nabi Saleh, Palestine against the illegal confiscation of their land and spring. The courageous actions of the Tamimi women of Nabi Saleh rescuing their captured child spread immediately on social media after the UK’s Daily Mail published a series of breathtaking photographs taken at the scene. The event was captured on video by Bilal Tamimi and Roya News TV.
As a masked and armed Israeli soldier chases down a hillside you can hear voices yelling, then the unmistakable sound of a screaming child. The boy appears in view as he turns to face the soldier. Screaming, the boy pivots then rushes past the soldier and up the hill through a mass of boulders as the soldier finally catches up with the boy and captures him. Placing the boy in a chokehold the soldier forces the struggling child over a bolder as cameras close in on the scene and record what’s happening. What follows, captured on video and camera, is a sight to behold.
The boy has a cast on his left arm. Every move the soldier makes, briefly loosening his chokehold before tightening his grip again, I wince at the thought of the boy’s arm and throat. The soldier looks exhausted and somewhat bewildered as the camera pans in on his face (1:13). As the camera pans out you can see the child struggling as the soldier tightens his grip on the child’s neck. One wonders, what threat does this child pose for the soldier? His bravery perhaps, did he throw a stone with his un-cast arm at Goliath?
The struggling continues over the wild screams of the boy. The soldier, ironically gasping for breath, yells out at the top of his lungs – calling for assistance from his comrade forces – unable to pull off this arrest of the boy on his own. He adjusts his rifle, pulls back the boy’s good arm and shoves the boy’s face towards the boulder, then stands and tries lifting the boy up from under the child’s armpits as the boy’s arms and cast fly into the air he lets out a painful scream. The soldier struggles to contain the squirming writhing boy who’s wildly kicking his legs into the air. The soldier is not up for this mission. He’s getting taken to task by a little boy. And that was before the Tamimi women of Nabi Saleh descended on the soldier.
Determined lionesses intent on rescue, showing no hesitation or fear whatsoever, they courageously plunge down on the soldier, pulling him off the child (2: 05). He thrusts them off and struggle ensues, he tackles the boy again as women and girls proceed yanking his limbs, beating his head, biting him, slapping him (while the soldier is yelling for backup), mounting his back, putting a chokehold on his neck, ripping his mask and finally tearing it off his face, unmasking him completely (2:52).  Other soldiers enters into the scene and rescue him from the Tamimi women of Nabi Saleh. The boy is bravely fighting him off the whole time.
Note the last scene of the video. The humiliated, defeated soldier draws a teargas canister, arms it, and throws it to the ground. This is an act of pure punishment and spite, reminiscent of the famous video of the UC Davis pepper-spray incident, which resulted in a wide-scale investigation. If there is ever a security reason for using teargas, this certainly is not such an occasion. Will the soldier face any consequences for this abuse of civilians’ rights? 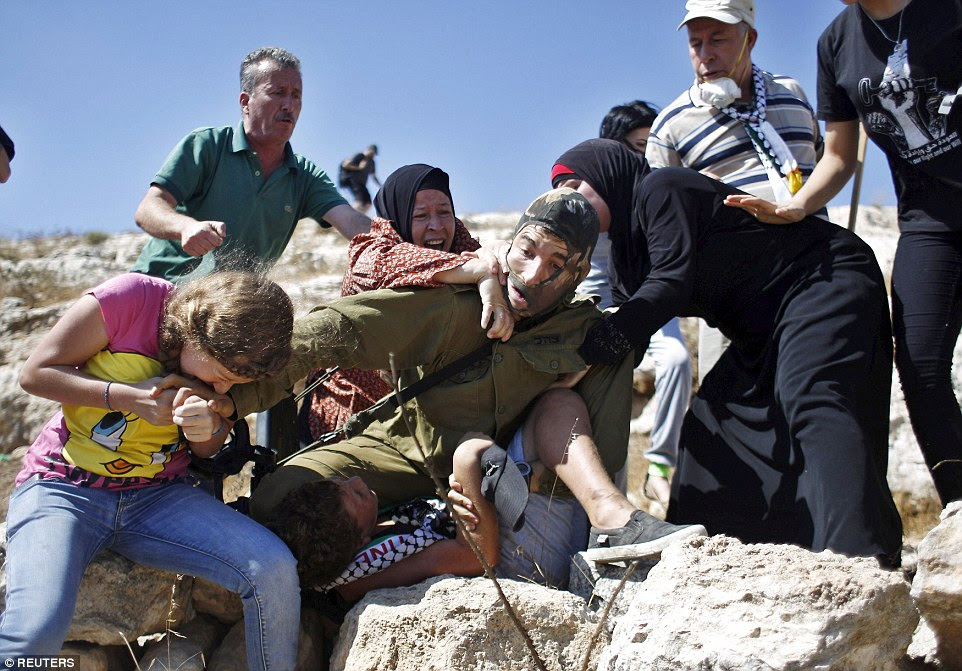 +11
This shocking image which appears to show Palestinians fighting to free a little boy held by an Israeli soldier appeared online on Friday
But it is thought the young girl in the photographs is Ahed Tamimi, whose parents Bassem and Nariman - also pictured - are well-known Palestinian activists in their village of Nabi Saleh.
The teenager has appeared in a string of similar videos where she challenges Israeli security forces and rose to prominence after she was filmed confronting one who arrested her brother, which resulted in her being presented with a bravery award.

Share
She was handed the 'Handala Award for Courage' by the president of Turkey, Recep Tayyip Erdoğan, in Istanbul, where she reportedly expressed she would like to live.
Online blogs have dubbed her 'Shirley Temper' and accused her of being a 'Pallywood' star - a term coined by author Richard Landes, describing the alleged media manipulation by Palestinians to win public relations war against Israel. 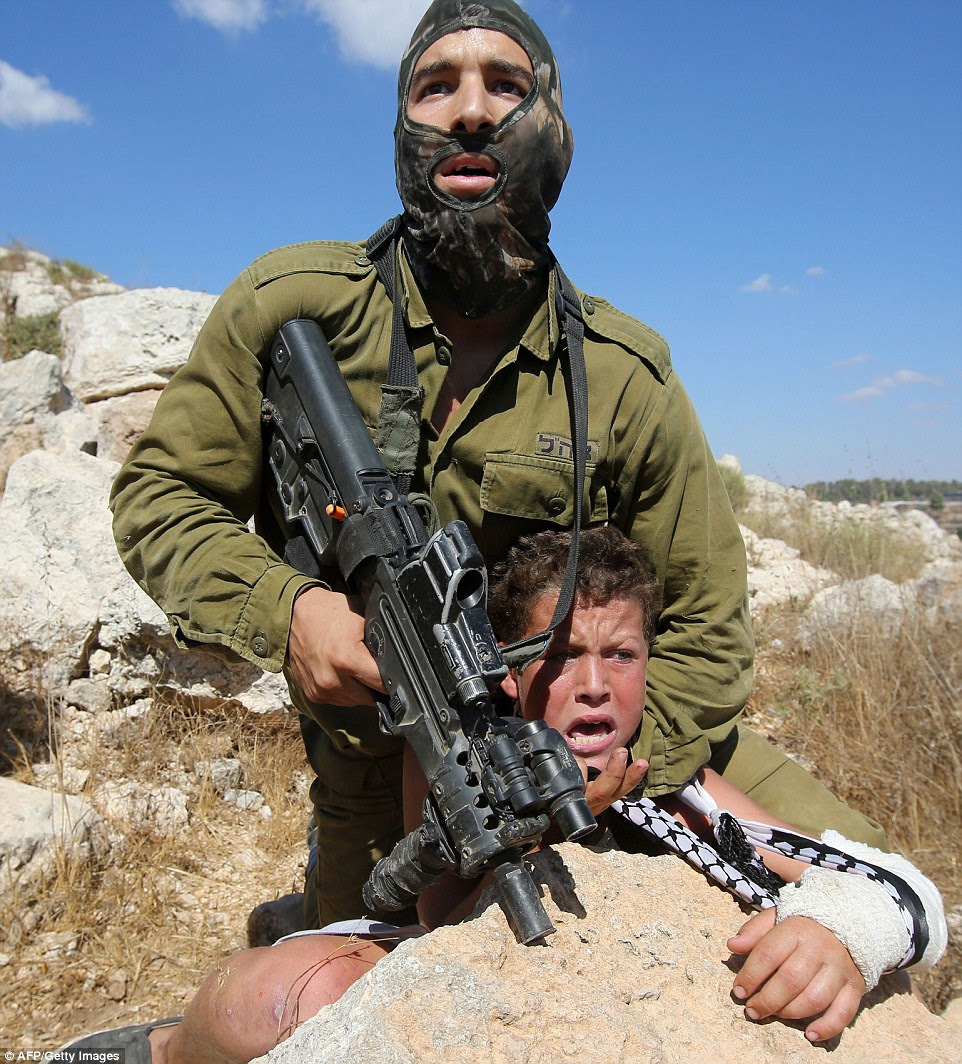 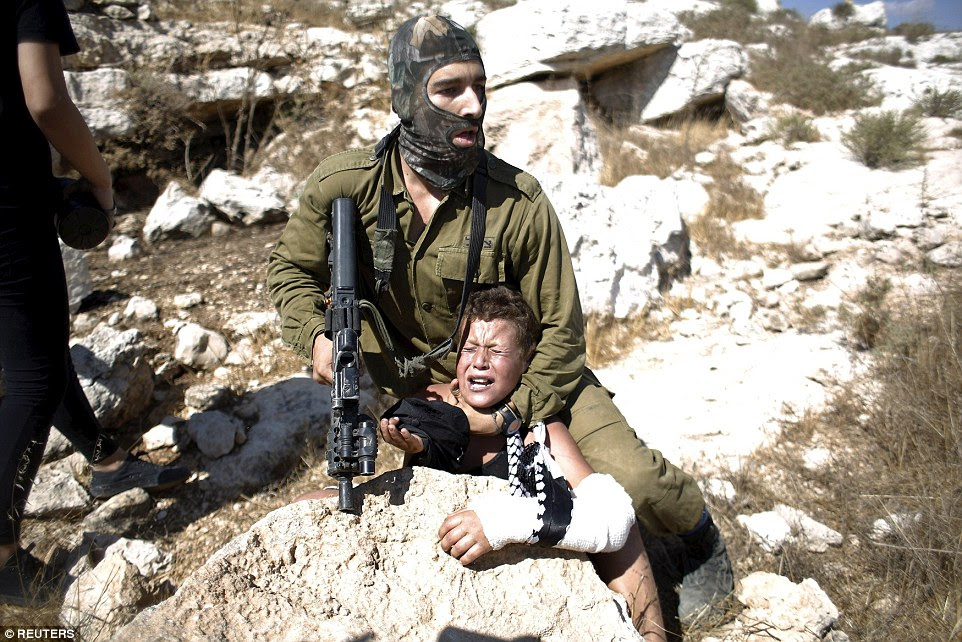 +11
According to an Israeli army spokesperson, the boy in the pictures was accused of throwing stones at IDF soldiers and was arrested 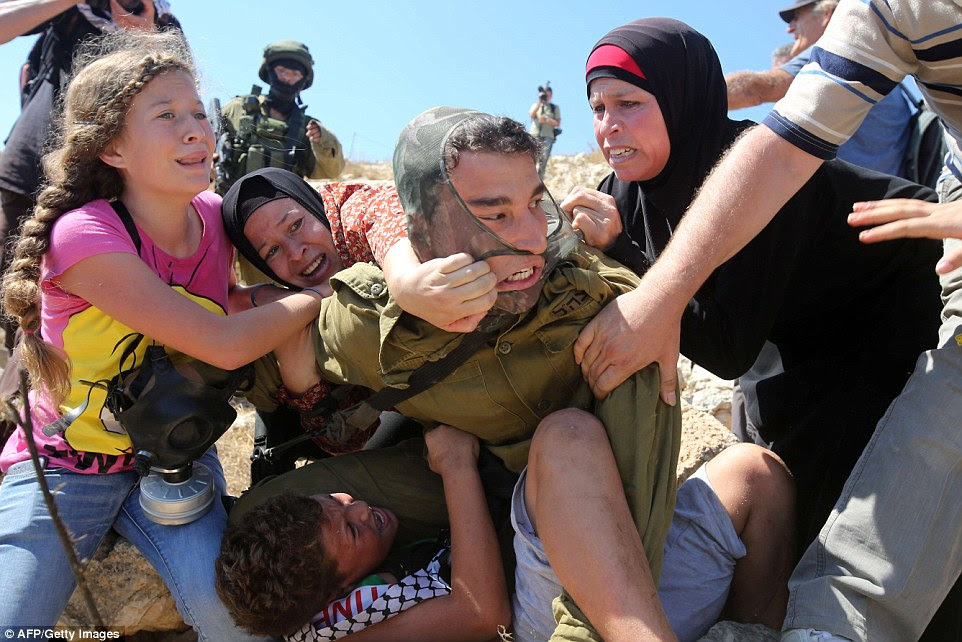 +11
It was then that the soldier was ambushed by a girl, who forces the weapon from his grasp, while two other women desperately fight to free the little boy
Her father, Bassem al-Tamimi, was convicted by an Israeli military court in 2011 for 'sending people to throw stones, and holding a march without a permit' - a charge his lawyers deny.
He has been jailed eight times, while his wife has been detained five times. Other family members, including their son Waed, has also been arrested.
Bassem organises weekly protests and it was reportedly at one of these demonstrations that the shocking images are said to have been taken.
An Israeli army spokesman said that Palestinians had been throwing stones at an IDF force which was set up in the area.
An image has emerged on the internet of a boy, said to be the youth that was held at gunpoint, throwing rocks with one arm, while his other remained in plaster and in a sling.
The spokesman added that a decision was made to arrest the boy and it was during the detention that a 'violent provocation' began, including a number of Palestinian women and children.
He told Haaretz that there was 'a violent disturbance of the peace in Nabi Saleh, in which Palestinians threw stones at IDF forces that were in the place. +11
It has emerged that the girl in the pictures (far left) is believed to be Ahed Tamimi, who has appeared in similar videos online where she confronts Israeli soldiers 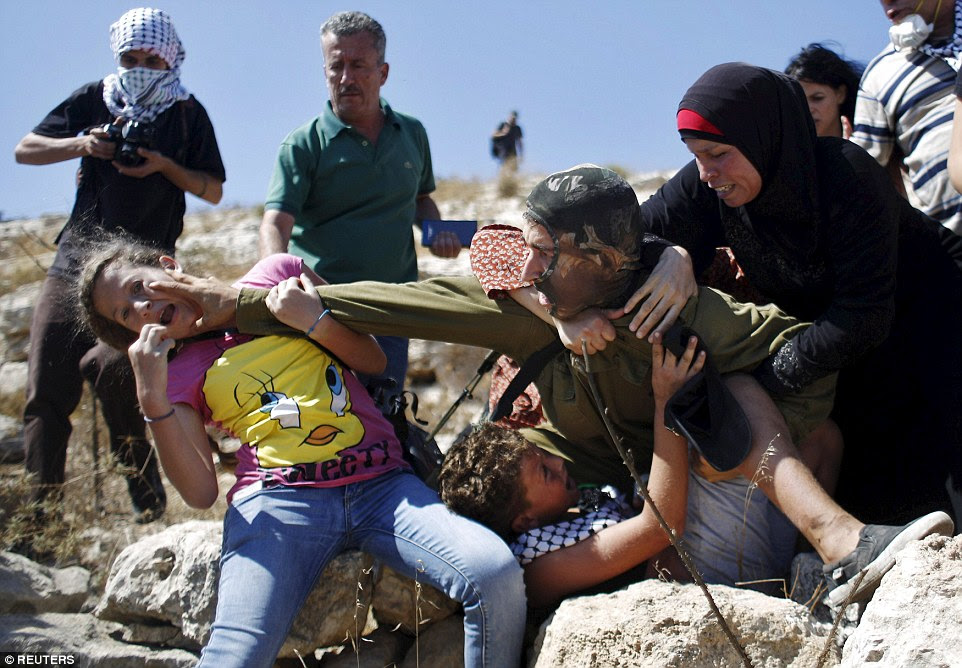 +11
She rose to prominence after she was filmed confronting a soldier who arrested her brother, which resulted in her being presented with a bravery award 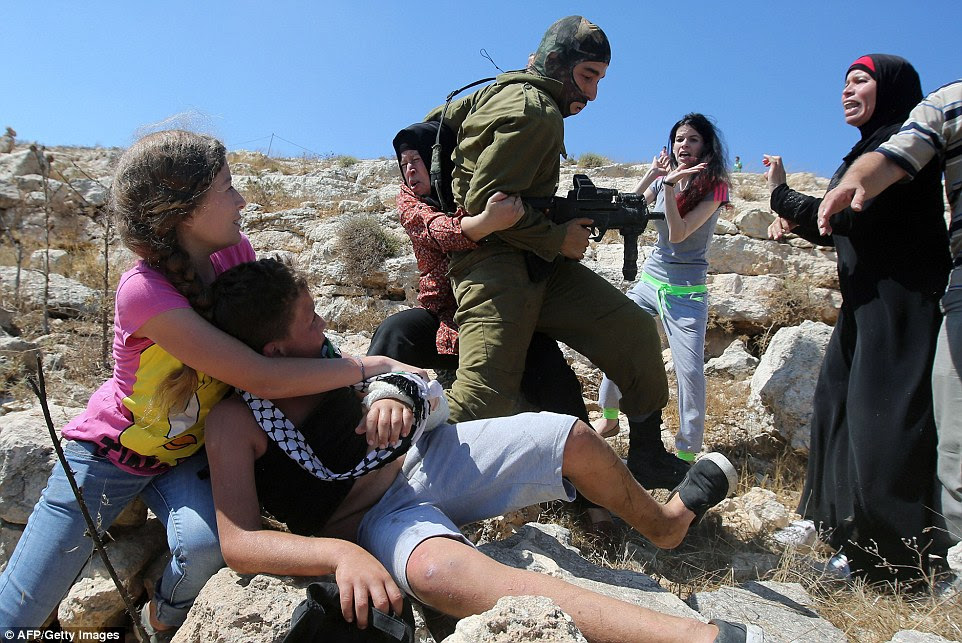 +11
Online blogs have dubbed her 'Shirley Temper' and accused her of being a 'Pallywood' star - a term coined by author Richard Landes, describing the alleged media manipulation by Palestinians to win public relations war against Israel
'The youth who was photographed was identified by the lookout force as a stone-thrower, and because of this it was decided to detain him. At the time of the arrest, a violent provocation by a number of Palestinians developed, including women and children. In light of the violent altercation, the commander decided to not to go ahead with the detention.'
He added: 'Two additional Palestinian youths were arrested for throwing stones during the violent clashes. The soldier pictured was lightly wounded as a result of the violent actions against him.'
The clash happened in the village of Nabi Saleh, near Ramallah, during protests against Palestinian land confiscation to expand the nearby Jewish Hallamish settlement.
In another flashpoint, Palestinian protester hurled stones at Israeli army bulldozer during clashes which following a protest against Israeli settlements in Qadomem, Kofr Qadom village, near the the West Bank city of Nablus.
They come a day after the European Union's outgoing envoy to the Palestinian territories said the 28-nation bloc was moving forward with measures against Jewish West Bank settlements.
The envoy, John Gatt-Rutter, did not provide a timeframe. But his remarks to reporters underline European discontent with Israel's continued expansion of settlements in territory that Palestinians want for a future state. 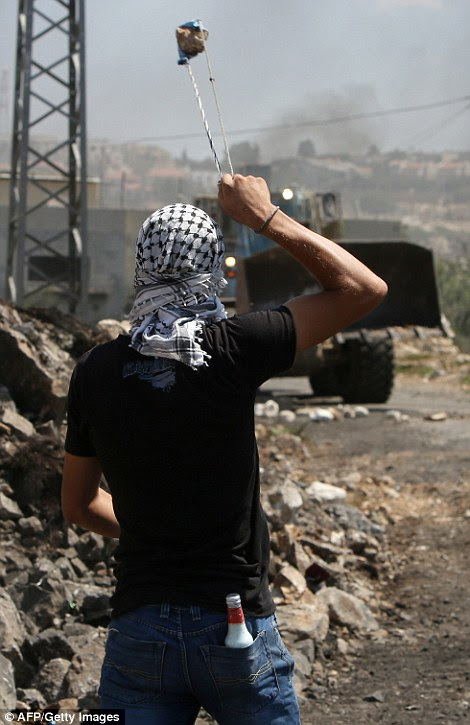 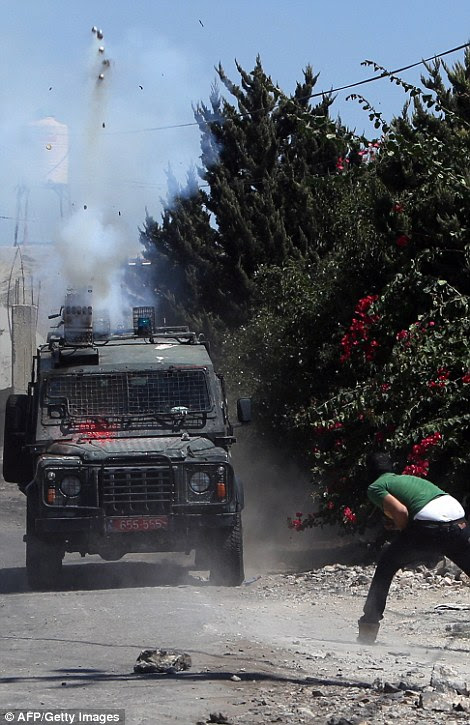 +11
Violent: A Palestinian protester (left), with a petrol bomb in his pocket, hurls rocks towards Israeli security forces during clashes after a demonstration against the expropriation of Palestinian land by Israel in the village of Kafr Qaddum, near Nablus in the occupied West Bank 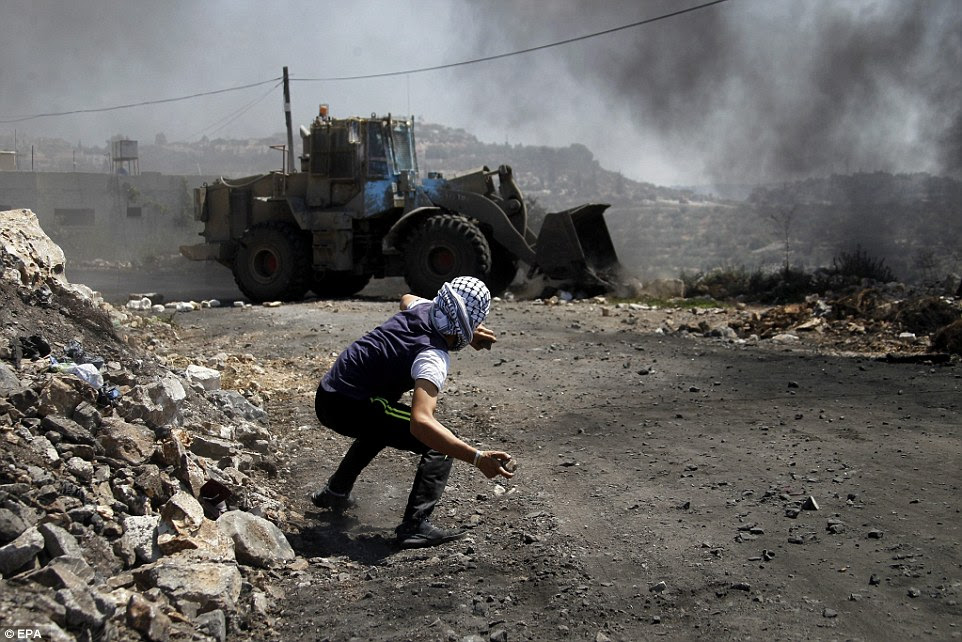 +11
Palestinian protester hurls stones at Israeli army bulldozer during clashes which following a protest against Israeli settlements in Qadomem
Gatt-Rutter said 'there is support within the union to go on', adding that there are 'more tools' the EU can use.
The EU, Israel's biggest trading partner, is exploring guidelines that would require Israel to label settlement products.
It already bars goods produced in settlements from receiving customs exemptions given to Israeli goods.
Gatt-Rutter's remarks come as a grassroots movement promoting boycotts, divestment and sanctions against Israel is gaining steam. 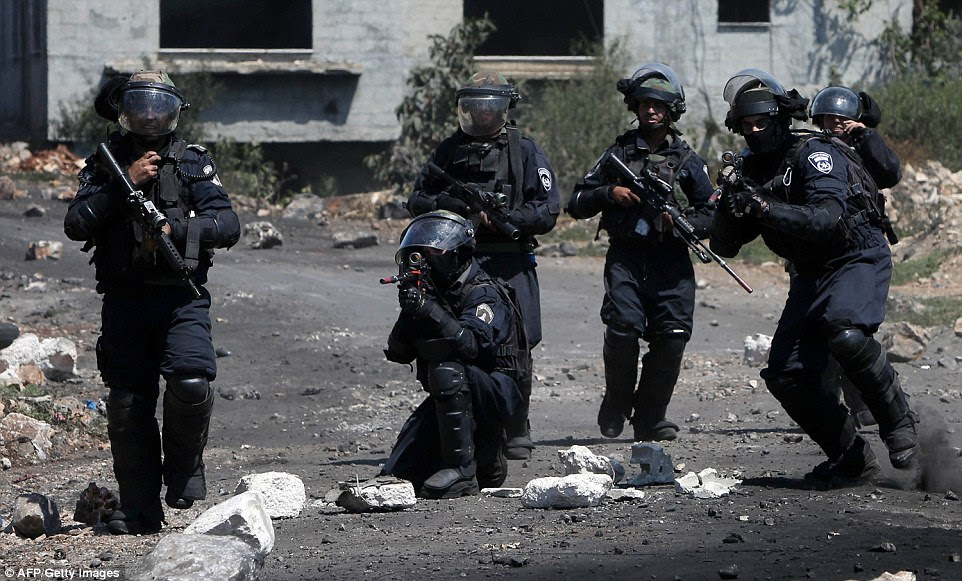 +11
Members of Israeli security forces aims their weapons towards Palestinian stone throwers during clashes following a demonstration against the expropriation of Palestinian land by Israel in the village of Kafr Qaddum, near Nablus in the occupied West Bank