Syrian rebels, US allies, one and all, execute 51 captured Syrian soldiers and civilians by shooting them in the back of the head. The US allies, vouched for by US Senator, John McCain can be heard screaming what McCain said is the new rebel yell, the Christian equivalent to “Thank God”. McCain is making the case to his new ally, Barack Obama, to provide these freedom loving rebels with big and better US arms, US naval support and US Air Force supplied air cover. God and John McCain really are great. 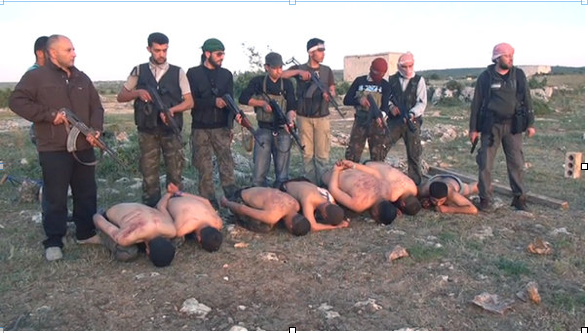 The Syrian rebels posed casually, standing over their prisoners with firearms pointed down at the shirtless and terrified men.
Tracking the Syrian Crisis

SYRIAN PRIEST BEHEADED BY US ALLIES IN SYRIA: