The GOP's Spectacular Failure to Take Out Donald Trump

NEW YORK MAGAZINE
In the wake of Chris Christie’s bombshell endorsement of Donald Trump on Friday, the New York Times has published a must-read, in-depth report on the desperate Republican establishment’s many spectacular failures to counter the candidacy of Donald Trump. From the inability of mainstream Republicans to unite against such an obvious threat, to Marco Rubio’s haphazard efforts to gain the support of departed rivals, to Mitch McConnell apparently giving his fellow senators permission to run against Trump this fall, the report paints a shocking (yet somehow still unsurprising) picture of a party in complete disarray and horrified disbelief. Here are some highlights:

GOP Senators Up for Re-election Should Feel Free to Attack TrumpWith the balance of power in the Senate at risk, Mitch McConnell is already getting ready to do serious damage control should Trump win the nomination and thus imperil contested down-ticket Senate races. According to the Times, the Senate Majority Leader has already given his colleagues permission to run negative ads against Trump this fall if they feel they have to distance themselves from the potential nominee in order to win reelection. “We’ll drop him like a hot rock,” McConnell apparently said.

Marco Rubio’s Failed Courtships of Chris Christie, Jeb Bush, and Mitt RomneyChristie was reportedly really peeved by a “tentative” voicemail Rubio left for him after he dropped out following the New Hampshire primary. Rubio’s chosen approach was apparently to assure the New Jersey governor that he still had a bright future in politics:

Mr. Christie, 53, took the message as deeply disrespectful and patronizing, questioning why “a 44-year-old” was telling him about his future, said people who described his reaction on the condition of anonymity. Further efforts to connect the two never yielded a direct conversation.

In addition, efforts by Rubio and his campaign to attract the support of Jeb Bush and Mitt Romney were also unsuccessful. “There’s this desire, verging on panic, to consolidate the field, but I don’t see and movement at all,” added Senator Lindsey Graham, who on Thursday night also half-joked that the GOP “has gone bat-shit crazy.”

Dreaming of a Contested ConventionThe campaigns of Rubio and John Kasich have both drafted plans to take out Trump via a brokered convention, going after Trump-committed delegates, who only have to vote for Trump in the first round of balloting. Then again, this type of scheming hasn’t been a factor up to now. As former Utah Governor Michael O. Leavitt told the Times about the GOP apparatus thus far, “There is no mechanism [to stop Trump]. There is no smoke-filled room. If there is, I’ve never seen it, nor do I know anyone who has.” 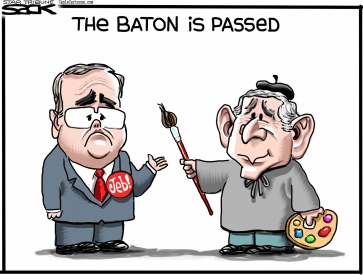 Nobody Wants Kasich AroundApparently, many Republicans are well-past tired of Kasich’s assertion that he has any path to the nomination, wishing he would just get out and let everybody get behind Rubio instead. Said one senior Republican senator, “He’s just flailing his arms around and having a wonderful time going around the country, and it just drives me up the wall.”

Governor LePage’s Rapid About FaceMaine Governor Paul LePage apparently “erupted in frustration” at a GOP luncheon earlier this month about Trump and wanted Republican governors to write an open letter rejecting him. That didn’t happen, and LePage just endorsed Trump on Friday.

Big Donor AbsenteeismThough GOP's big-money class seems to dislike Trump, efforts to corral them into an coordinated effort to take him out have mostly failed to gain any traction. A plan to eliminate Trump by airing ads showing he was unfit for the presidency did not attract donors like Sheldon Adelson or Paul Singer last fall. The Koch brothers, though they hate Trump’s health care rhetoric, have also skipped the fight, and a new ad effort by the dark-money conservative group American Future Fund is so late into the fray it might not have much of an impact on the crucial early-March primaries.

So far, one of the most interesting reactions to Times report has been from Atlanticwriter and George W. Bush-speechwriter David Frum, who launched an inspired, 16-point tweet-storm venting about various GOP illnesses — both covered in the piece and not. Among his complaints:
Or maybe candidates should adopt jokes that late night hosts have been using for a decade:
So what can the GOP really do at this point? The Times emphasizes that — still — no cohesive strategy really exists, though the party mainstream seems to be trying to come up with one to execute. Along those lines, this week Republican strategist and former Romney-campaign manager Stuart Stevens tried to rally the party with both a piece in the Daily Beast and a follow-up interview with the Washington Post. From the latter piece, Stuart said the GOP’s plan should be to start beating up the bully:

What do we know about Donald Trump? He is extremely emotional and volatile and responds to any perceived slight. He knows almost nothing about policy and, like a lot of lazy people, tries to assert he doesn't need to know. He has little or no support staff that can help compensate for his weaknesses. And most importantly, Trump thinks he is going to win. That's a huge potential asset to an opponent if Trump starts to feel that his "victory" is in jeopardy. […]
When in a fight and an opponent doesn't fall down when hit, you don't stop hitting. To win, you hit harder and faster and look for any opening to land more punches. So it is with a campaign. Don't fall into the trap of thinking because a line of attack didn't work at first that it isn't effective. Repetition is key, and often attacks have impacts inside opponent's campaigns — or inside an opponent's head — that have an unseen but cumulative impact.

Then again, how do you fight if you can barely stand:
And as Chait notes, it's not like there are that many Trump coping strategies available to the GOP anyway:
Lastly, even if the establishment strikes back successfully, a defeated and rejected Trump just creates another problem, as Talking Point Memo's Josh Marshall quips, “The saving grace for the GOP is that if they're actually able to destroy Trump with a brutal, scorched earth total war which drives all the way to the convention, he'll definitely go away quietly.”
This post has been updated to incorporate additional outside commentary.
Posted by Deuce ☂ at 2/27/2016 04:27:00 PM